It’s playoff time, Canada’s favourite time of the year. Beard growing season has officially started across the nation as passionate fans flock to the TV sets in hopes of witnessing a magical Stanley Cup run. Unfortunately, the only Canadian team to make the playoffs this year is Montreal so some Canadians may be turning their attention south of the border for a team to cheer for. For those looking to see some live playoff action, here are a few hockey hot spots that are sure to host the best playoff atmosphere this season. 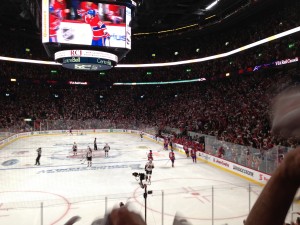 As Canada’s only hope to bring the cup back to Canadian soil, the Habs have a lot of pressure on them. For those that are old enough to remember, Montreal was the last Canadian team to hoist the cup back in 1993 when they defeated Wayne Gretzky and the LA Kings in the finals. Anyone from Montreal can tell you that the city lives and breathes hockey. The players on the Canadiens have rock star status and winning a Stanley Cup propels them into the annals of hockey lore in Montreal. With pregame events hosted in from of the arena, enthusiastic fans, and a vibrant nightlife after games, Montreal is an outstanding place to catch some playoff action. 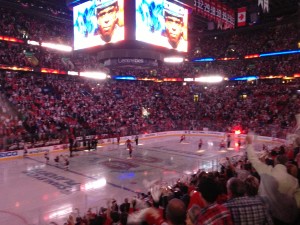 Stanley Cup champions in 2011, the Bruin are looking to repeat on recent pos-season success. Again this year the Bruins are a favourite to win the cup. The loyalty of the Bruins fans has been rewarded by a squad that plays a hard hitting style of a game that mirrors the gritty fan base that follows this team. Fans in the gardens have been known to provide free beer showers to those opposing fans who feel brave enough to wear an opponents’ jersey to the game. Outside of the hockey rink, visitors to Boston are surrounded by an area as rich in history as any other in America. First stop for many European settlers, the city has a strong Irish and Italian cultural influence which means great restaurants and fun pubs.

Winners of two of the past four Stanley Cups, the Blackhawks are looking to add to their bid for a dynasty. The United Center, also known as the “Madhouse on Madison”, is one of the loudest arenas in the NHL. With some of the most dynamic players in the game, Chicago has a legitimate shot to repeat as cup winners this year. Aside from hockey, Chicago is also one of the most dynamic cities in America. More than just the “Windy City”, Chicago plays host to some of the finest restaurants in addition to their famous deep dish pizza.

Coupling a Stanley Cup playoff game with a trip is a great way to see a city in its best light. There is nothing better than seeing the streets of some of North America’s greatest cities full of jubilant fans after watching the home team win a playoff hockey game.