Have you ever seen a Krampus? The half-man half animal beastly creature has the singular intention of frightening everything in its path. Usually accompanied by fire, whips, ominous music, cow bells, and firecrackers, these beasts are nothing to mess with. Boasting wood carved masks ornamented with real bone for teeth and horns, these creatures appear to be something out of a horror film. 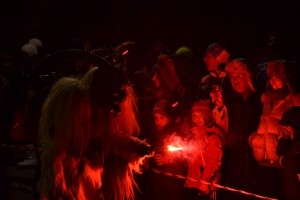 The Krampus will chase terrified individuals through the streets in order to whip them. Others have their hands covered with grease to wipe on the faces of the people in the crowd. Throughout all of this commotion firecrackers are lit off with drums beating in the background. 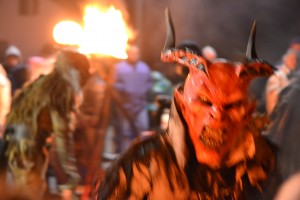 Stemming from Alpine Folklore, the idea behind the festival is that the Krampus punishes the children who have misbehaved while St. Nicolas gives gifts to those who have been good. It’s safe to say that the extreme nature of the Krampus is an effective way to deter children from misbehaving knowing that this beast could be lurking in the shadows ready to make sinners pay the toll. It’s also safe to say that this kind of parade would never be acceptable in North America. Seeing a Krampus whip a child would definitely end up with the beast in prison.

This Alpine tradition takes place on December 5th or 8th, depending on the location. Unheard of in North America, this festival takes place before the holiday of St. Nicolas on December 6th and aims to terrify young children into being on St. Nicolas’ ‘nice’ list.

Check out this video for a better idea of how scary this parade actually is.