Osheaga’s 9th edition is successfully under way at Parc Jean Drapeau in Montreal. The first day of the event featured a stellar lineup that drew a capacity crowd of 40,000 attendees. Crowds slowly trickled throughout the day as people cut out of work early to get to the show. Those who came late missed some great opening acts.

As the second band to play on the main stage, Bleachers got the crowd moving with some fresh upbeat music. Reminiscent of the performance by Capital Cities that kicked off last year’s event, the show put on by Bleachers impressed fans and surely garnered a new following for the band. The show was highlighted by their hit single ‘I Wanna Get Better’ and a cover of the Cranberries ‘Dreams’. 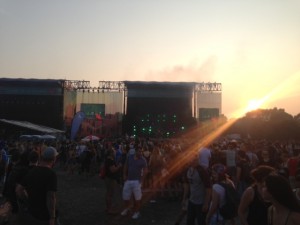 As the day wore on the shows got longer and the bigger name bands had their opportunity to impress the growing crowds assembling at the main stage. Sam Roberts put on an inspired show for his hometown and Old Crow Medicine Show provided a nice change of pace with their southern country inspired twang. One of the best moments of the day began with the familiar anthem of ‘Wagon Wheel’ which had fans wrapping their arms around each other while singing and swaying from side to side. The hot sun wore on throughout the day heating up the event as the stages heated up with more great music. 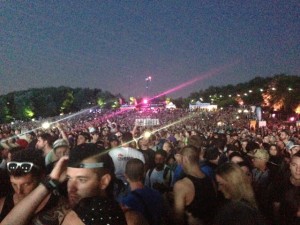 Childish Gambino kicked off the evening by getting the cut-off jean short crowd jumping up and down. Foster the People got some heads nodding and rocked a few flowers to the floor. Skrillex let it be known that he was at the main stage with a massive on-stage display of props to accompany his mix. Meanwhile on the Green Stage Chromeo, another Montrealer, was pumping up a solid audience. By the time these two acts finished almost the entire capacity crowd of 40,000 had made its way to the main stage to catch the final performance of the day, Outkast. After 20 years of making music, Outkast demonstrated why they were chosen to headline this event. Fans were dancing throughout the set that brought the first day of Osheaga to a close.