The 2013 edition of the Osheaga music festival in Montreal promised to be an outstanding spectacle and it delivered on all counts. From Capital Cities as the opening act to Mumford and Sons closing off the festivities last night, the weekend was a memorable experience for music lovers of all genres. 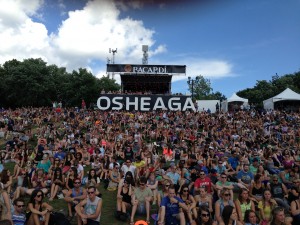 The island based venue located at Parc Jean Drapeau held its own against the crowd of 42,500 spectators that showed up for each day of the festival. Short bursts of sun, rain, and lightning didn’t stop bands or festival goers from enjoying the weekend. Event organizers are reporting a record attendance of 135,000 over the three days.

Who Stole the Show?

It’s obvious to state that last night’s Mumford and Sons act took the cake as the best performance of the weekend. They are a great band with an vast following and they put on an incredible heartfelt performance.

See how they finished their show here: http://www.youtube.com/watch?v=Ck63MJGC0OM&feature=youtu.be

However, many Osheaga attendees left Sunday night still raving about the opening act by Capital Cities. The Los Angeles based band put on a memorable performance to kick off the weekend with an energy filled show that included the audience in choreographed dancing. Other great acts of the weekend included another L.A. band, Grouplove, who’s front woman Hannah Hooper’s jubilant expression of music had fans bouncing throughout their set. Saturday evening featured an emotional set by Imagine Dragons that fans will remember as one of the weekend’s top performances. Other notable acts included The Gaslight Anthem, Vampire Weekend, Phoenix, Frank Turner, Frightened Rabbit, and the Lumineers.

Who DIDN’T Steal the Show?

K-OS. Slotted in as the second act on Day 1 (Friday), K-OS performed for 2 minutes before stopping and stating “I love music too much to do this”, then proceeded to give away his all access pass and left the stage. He was tweaked because the monitors that were supposed to play back his vocals weren’t working. Understandably, its incredibly difficult to perform under those conditions but there are better ways to treat your loyal fans than just bailing on them. To the surprise of many, K-OS reappeared in the evening of Day 2 to replace Frank Ocean but still managed to deliver a sub par show.

Its a tough call with so many good acts over the course of 3 days but Capital Cities gets my vote with the best performance of the weekend. Mumford and Sons comes a close second but the energy packed 30 minute set by the LA band danced its way to the top of the list. 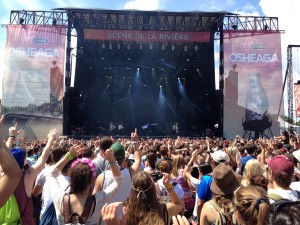 Best Songs of the Weekend

The Head and the Heart – Lost in My Mind

The Cure – Pictures of You

Grouplove – Itchin on a Photograph

The Heavy – What Makes a Good Man

Jimmy Eat World – I Will Steal You Back

Flogging Molly – If I Ever Leave this World Alive

Stars – Take me to the Riot

Overall, the Osheaga did a commendable job of starting all their acts promptly as scheduled as well as improving last years issues on spectator flow between stages the 5 different stages. 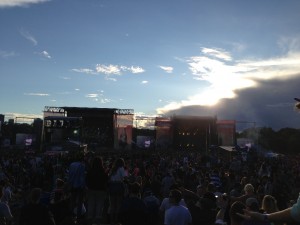