Barcelona is most famous for its spectacular beach vibe and parties that last until the morning sun rises. Does the city provide the same excitement in the winter months? Between the unique architecture of Gaudi, FC Barcelona and the wide variety of tapas locales, there is plenty to entertain visitors during any season. 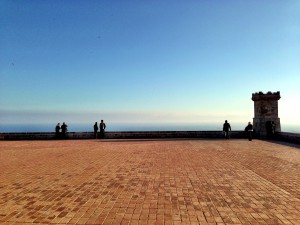 View of the sea from the top of the castle

Barcelona is a metropolitan city with a rich history. Dating back to the Franco rule in the mid 1900’s, the local culture of Catalan was repressed to the point where public displays of local traditions were banned. Fast forward to current day and the Catalan culture is once again thriving. Any traveler to this city will observe how it’s laid-back, liberal vibe can be seen in everything from the architecture to the nightlife. 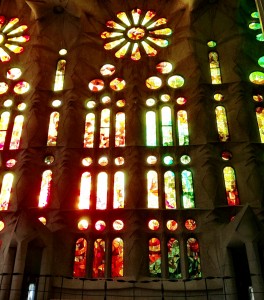 Stained glass windows from inside the Sagrada Familia

One cannot visit Barcelona without appreciating the mark Antoni Gaudi has left upon the city. Starting from his unfinished masterpiece at the Sagrada Familia to seeing his artistic genius exemplified at Parc Guell, Gaudi’s architecture will leave a lasting impression on anyone who is lucky enough to witness his creative mind working form. The Sagrada has been in construction for more than 100 years and is not planned to be completed for at least another 10 years. Modern techniques for stone carving and building have expedited the process however, a team of workers work tirelessly to finish the church in the true manner in which Gaudi intended.

Barcelona is synonymous with Football (soccer). Year after year it is home to one of the best teams in the world which is exemplified by its rich tradition of championship teams that include 4 champions league titles on top of many others. FC Barcelona calls Camp Nou home, a stadium that seats close to 100,000 soccer fanatics. Tickets are not easy to come by, especially when battling bitter rivals, Real Madrid. Many of the songs that the fans sing during the game are derogatory chants aimed at Madrid and its players. One should not miss the opportunity to take in this spectacle for the club that is affectionately called ‘Barca’ by its fans. Click the link to see the player introductions of FC Barcelona vs Celtic.

Spain is known for its nightlife and Barcelona brings fame to this stereotype. Starting the night off at one of the many tapas restaurants is the best way to get the ball rolling. Sip on a beer while the host brings out small dishes to sample. The seafood is often a popular choice due to the close proximity to the sea. Sit back while enjoying an ‘Estrella’ (the local beer) or a glass of Cava (Spanish version of Champagne) while the time unknowingly slips away and the action picks up. The Del Borne district is a popular choice for a few drinks before heading to a dance club on the beach. Remember that the clubs in Europe are not like the ones in North America, many do not open until 1:00 AM or 2:00 AM and last until the sun comes up. 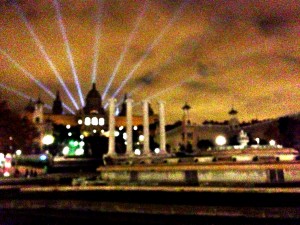 Even in the winter, Barcelona has more than enough activity to keep any traveler occupied. But to witness the city in all of its glory, there is nothing like the summer. Either way, an opportunity to visit Barcelona should never be passed up.