Italy is known for its many spectacular full bodied wines. When speaking of wine, one immediately relates to Tuscan wines such as Chianti or Brunello. Or perhaps wines such as Barbera, Nebbiolo or Barolo of the Northwest Piedmont region. Venture further east, north of Verona and you will find yourself in perhaps the most unique wine growing region of Italy, South Tyrol. 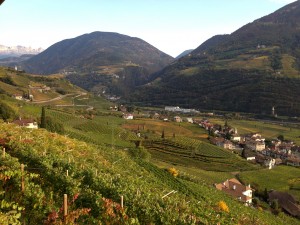 Drop yourself onto the Weinstrasse (Wine Road) in the province of Bolzano and you won’t know whether you are in Italy or Germany. The South Tyrol region was formerly a part of German speaking Tyrol region before it became part of Italy so it maintains many of its historical characteristics and culture. Don’t be surprised to hear primarily German spoken in the wineries and storefronts on the Weinstrasse.

What Types of Wine are South Tyrol’s Best?

South Tyrol’s wine growing region is separated into approximately 45 percent white and 55 percent red grapes. The unique climate coupled with the location nestled between the mountains gives these wines a unique character not found in other parts of Italy. 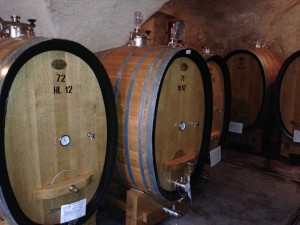 Vernatsch has its roots as the wine the farmers drink. Travel to any café in the wine growing areas of South Tyrol and you will find farmers clothed in their blue aprons sipping on this light coloured wine throughout the course of the day. The light character of this wine is trumped by the dark velvety nature of the Lagrein. This dark red wine is a welcomed change from the dark wines in other regions of Italy.

When booking your next wine trip wine touring in Italy, take a closer look at the Weinstrasse in the province of Bolzano. You will be pleasantly surprised by the quality of the wine and the beauty of the surrounding landscape.