Want to celebrate St. Patrick’s Day with a bang but don’t know where to go? There’s no doubt that a local Irish Pub has been counting down to this day for months and will probably throw one heck of a bash.  For those people who want to venture outside their regular watering hole to crank up the St. Patrick’s Day celebrations, cities like Montreal, Boston, St. John’s, and Dublin offer much more than Irish Whisky and Guinness.

Montreal’s annual St. Patrick’s Day parade has just completed its 191st year. Despite frigidly cold temperatures, the parade drew massive crowds of children and adults cloaked in green attire. Montreal is a city known for its vibrant culture which is exhibited with this annual party. Irish pubs like Hurley’s on Crescent Street, and McKibbon’s on Rue St. Laurent, are two of the best places in town to get an Irish beer or two. Plan to go early because both bars are usually filled to capacity well before noon.

Boston is a city with a long history of Irish decedents. This has cultivated a rich culture that pays annual tribute to the old country with a few libations on St. Patrick’s day. Boston also hosts a well attended parade that was boycotted this year by its mayor, Marty Walsh.

Once the landing point for many Irish settlers, St. John’s is no stranger to a good St. Patrick’s day party. George Street is the center of the action. Meander between bars to sample the various live acts while conversing with the friendly locals. 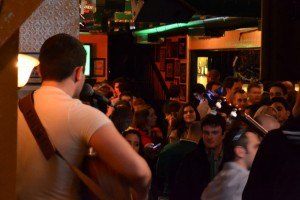 Perhaps there is no greater place to celebrate St. Patrick than the home of Guinness and Ireland’s capital. Before wandering through the walkways of Temple Bar, visit St. Patrick’s Cathedral to pay homage to the Saint whom the world has to thank for this fabulous day. The Temple Bar area is the best area to be for traditional live music and Irish dancing. Expect bands comprising of some of the best acoustic guitar entertainers in the world alongside fiddle players that will speak directly to the soul.